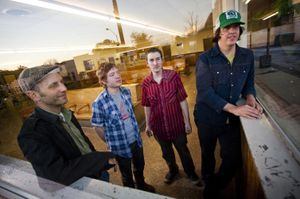 Ham1 released 4 albums throughout the 00's, their latter two, 'The Underground Stream' and 'Let's Go On and On and On With Ham1' through Cleft/Infinity Cat and Cleft. Made up of veteran Athens, Ga musicians, they currently perform as a new group known as 'Old Smokey.'

Review of LET'S GO ON AND ON AND ON WITH HAM1
by James M. McHugh

Through the last half-decade or so, Jim Willingham's ever-expanding canon-of-song has become somewhat of an Athens, Georgia institution; in that rough interval, he and his band Ham1 have performed extensively amid the vaunted downtown music scene, toured a good bit, and recorded no fewer than four full-length albums that both reflect and expand upon that locale's long-noted proclivity toward idiosyncratic narrative and a psychedelicized instrumental approach to fleshing elemental chord changes into full-blooded songs. Ham1's newest offering, LETS GO ON AND ON AND ON WITH HAM 1, somehow miraculously manages to expand on both of those factors simultaneously, a phenomenon attributable to fresh directions taken in the realms of the studio and in the development of the band's sonic palette, song-per-song.

A multicolored, tremulous and sublimated production by Jason Robira of Athens' psych-experimentalists Dark Meat capitalizes on Ham1's newfound progressive, textural tack. Featured prominently is an astonishing guitar interplay that somehow recalls YO LA TENGO, J MASCIS and BUCK OWENS all at once. The juice is all there guitarwise, for sure, and it is a forward-thinking and subtle touch on the mixing-desk that makes this record a rare and special thing: it's not unusual for unexpected, angular Fender-snarls to surface to the murk and slap the back of a shaky bit of reverb-o-twang straight outta Link Wray Ð a dynamic that transfigures the whole into something akin to one of JOHN CALES's rootsier affairs, or the work of an earthier ENO. And here, OLIVIA TREMOR CONTROL and ELF POWER tape-manipulator and multi-instrumentalist ERIC HARRIS is allowed to step further out from his role as live- drummer; he makes his characteristically inventive and edifying statements on additional percussion, piano, air organ, and guitorgan.

To imbue proceedings with a strange and celebratory ambiance, Ham 1 enlists a classically Athenian horn-section, featuring former members of Olivia Tremor Control and Dark Meat, and the hyper-intuitive Elephant Six veterans JOHN FERNANDEZ and HEATHER MACINTOSH on violin and cello, respectively Ð their rueful performances during the vocal-less coda of the bouncy, deceptive pop-number GHOST LOOP emphasizes the melancholy air its lyrics were creating from the get-go.

LET'S GO ON AND ON AND ON WITH HAM 1 finds the band reveling in sonic expansion a-plenty - in fact, there are three instrumentals across the record, all unified by the notion that they conjure some mythic day when BOB WILLS drunkenly discovers a BIG MUFF. However, Ham 1's calling card remains wholly intact: Willingham's affable, affecting delivery of his character-driven narratives.
As with any fully-felt folk-song, the main mode of emotional communication here are the lyrics and vocals, and Willingham speaks, intones and imparts his like an advising, wide-eyed friend beside you on a barstool might; think of a somewhat-southern-fried Jonathan Richman with his arm amiably around you on the porch, or a more-with-it Pip Proud overdubbing his vocals over a long-lost Guided-by-Voices track, and you're getting there. The inherent tension brought to bear between Willingham's heart-bravely-on-sleeve tendency toward vocal openhandedness and the swirling complexities of the ensemble playing and production gives the record its rarefied blend of sunlight and shade that makes for repeated, rewarding listening -- and allows LET'S GO ON AND ON AND ON WITH HAM 1 to stand as a brash progression not only for the band itself, but for the skewed and celebrated psych-pop of Athens, Georgia.

(Ham1 has released prior albums on Athens own Orange Twin Records, and Nashville's Infinity Cat and Cleft labels. They have toured both the U.S. and Spain as VIC CHESNUTT's backing band, as well as touring and recording with LIZ DURRETT for her most recent album, OUTSIDE OUR GATES)

While you were blinking, Ham1 finished their 4th LP, Let's Go On and On and On With Ham1. We here at Cleft Music are still firm believers they're the best band in Athens, GA. Of course, we're slightly biased, but we feel this as fans of years of great psyche rock folk pop hurrah from this bed of music's fertile grounds. With this current release, Ham1 follow their signature style of instrumental guitar driven surf like oddities married with double take simplicity and unassumingly sincere lyrics driven by captain, Jim Willingham. If tracks like "Chief Broom" or "Escape Hatch" don't get you flying out of your recliner into outer space, then you either have no spirit of adventure or don't own a recliner. if you like artists like Olivia Tremor Control or Neutral Milk Hotel, you may very well fall in love with Ham1 like we have. Let's Go On and On and On With Ham1 is a perfect starting point. Their unique sound moves in every direction. We've pressed 500 copies on 12" vinyl and also have it available as cd and download.