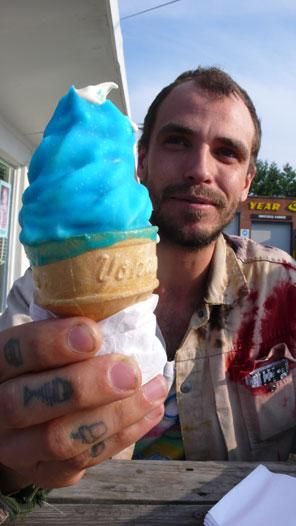 Jonny Fritz is from Esmont, Virginia. At 17 he got on a motorcycle and left home for all over the damn place. He started writing and singing before he even knew how to play guitar. Cleft Music first spotted him performing around '03 in Nashville at Guido's, singing a cappella tunes about things like the "Morning of Love," and "Some Badass Mother F*cker." Years, numerous locales, and a handful of album releases later, Fritz has worked with artists such as Dawes and Jim James and performed with countless others. Cleft is proud to have produced and released vinyl of his first studio album, 'Down On the Bikini Line' in 2011. If you've ever seen him perform, it's easy to see he's the real deal. Think rural folksiness with cosmopolitan curiosity. Fritz's travels have taken him all over the United States, to Europe, South America, as well as a couple trips to India where he found his GiVson Guitar. Yes, a country boy CAN survive with a little outsourcing. A tireless performer, leather crafter, air brush artist, marathon runner, world traveler, and by now, a decent guitar picker, Jonny Fritz has become a walking encyclopedia of country, folk, bluegrass, traditional, and more.

Down on the Bikini Line

Cleft Music is prouder than a moose on hump-day to offer Jonny Corndawg's modern country masterpiece, Down on the Bikini Line. Already praised by numerous year-end lists as being one of the best albums of 2011, we are offering it in 150 gram, black vinyl with a download coupon of course! These numbers are limited so pickup a copy right here or from the 'Dawg himself at one of his SHOWS. Please NOTICE if you are outside of the U.S., use the international shipping options at the bottom.

I'm Not Ready To Be a Daddy

Jonny Fritz serves up his 1st LP with the help of Cleft Music and his friends at Ozone Kids/Barcelona, Turd Werd/Maine and, Natrix Natrix/Austin. Jonny himself screenprinted the GLOW IN THE DARK jackets! Get your copy here before they run out! We only have a small handful left so once they're gone, they're gone for good!